(CNN)-FIFA and UEFA have suspended all Russian international and club teams from their competitions “until further notice,” the governing bodies announced in a joint statement on Monday.

World football’s governing body, FIFA, and European football’s governing body, UEFA, said that both organizations’ presidents — Gianni Infantino and Aleksander Čeferin — “hope that the situation in Ukraine will improve significantly and rapidly so that football can again be a vector for unity and peace amongst people.”
UEFA’s club competitions include the men’s and women’s Champions League, the men’s Europa League and the men’s UEFA Conference League.
Spartak Moscow had been due to play RB Leipzig in the Europa League, with the first leg in Germany on March 10 and the second leg scheduled for March 17, but that game has now been called off. 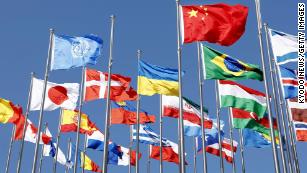 Ukrainian athletes ‘seeking safety in bomb shelters’ call for Russia and Belarus to be banned from international sport
“The UEFA Europa League matches between RB Leipzig and FC Spartak Moskva cannot take place, and, as a consequence, RB Leipzig are qualified to the quarter-finals of the competition,” UEFA said in a statement.
There are no Russian teams remaining in UEFA’s other club competitions this season.
On the international stage, FIFA’s jurisdiction over World Cup qualifiers means that, as it stands, Russia will not be able to play its World Cup playoff against Poland scheduled for March 24.
The match was originally set to be hosted in Russia until FIFA announced on Sunday that Russia must play all upcoming international fixtures on neutral sites without fans under the name “Football Union of Russia,” following the invasion of Ukraine.
“Following the initial decisions adopted by the FIFA Council and the UEFA Executive Committee, which envisaged the adoption of additional measures, FIFA and UEFA have today decided together that all Russian teams, whether national representative teams or club teams, shall be suspended from participation in both FIFA an UEFA competitions until further notice,” read Monday’s joint statement. 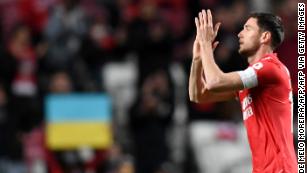 Roman Yaremchuk: Ukraine and Benfica star tears up after receiving standing ovation
“These decisions were adopted today by the Bureau of the FIFA Council and the Executive Committee of UEFA, respectively the highest decision-making bodies of both institutions on such urgent matters.
“Football is fully united here and in full solidarity with all the people affected in Ukraine.”
FIFA had faced criticism for its earlier decision to allow Russian international teams to continue playing their scheduled fixtures, with the president of the Polish Football Association describing it as “disgraceful.”
FIFA said on Sunday that “no flag or anthem of Russia will be used in matches where teams from the Football Union of Russia participate,” and added its measures were “in line with recommendations from the International Olympic Committee.”
Polish FA President Cezary Kulesza called the decision not to implement a total ban “unacceptable” and said that the Polish national team would not play Russia “no matter what the name of the team is.” 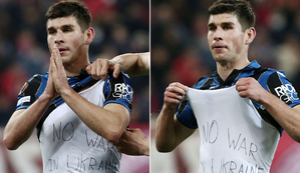 UEFA moves Champions League Final from St. Petersburg as sporting world reacts to Russian invasion of Ukraine
UEFA has also announced that is has ended its partnership with Gazprom, the Russian majority state-owned energy corporation.
Gazprom was one of UEFA’s main sponsors and its branding featured prominently on advertising hoardings during Champions League matches and in commercials during games.
“UEFA has today decided to end its partnership with Gazprom across all competitions,” the statement read.
“The decision is effective immediately and covers all existing agreements including the UEFA Champions League, UEFA national team competitions and UEFA EURO 2024.”
SourceCNN
Share
Facebook
Twitter
Pinterest
WhatsApp
Previous articleVladimir Putin is facing stiffer opposition than expected — both inside and outside Ukraine
Next articleKITWE CRIMINALS ARRESTED

Newspaper is your news, entertainment, music fashion website. We provide you with the latest breaking news and videos straight from the entertainment industry.